For over 100 years, Roger Pradier® has lit up the outdoor spaces of
our everyday life with consistency and passion.
find out more

Roger Pradier®: our history
Being part of a long tradition of craftsmen

From a very young age, in his native Périgord, Jean Pradier began the trade of tinsmith. He had a true passion for an already ancient trade. Lanterns drew his attention and captured his mind. He loved the idea of being able to master the material, imagine shapes and purposefully fashion what is both useful and beautiful. At the end of the 19th century, Paris was undergoing complete renewal. The “City of Lights” was under complete construction and Baron Haussmann was mobilising talents. Jean Pradier went to this city that inspired him and plunged into this era of modernity.

Light is not just about brightness

He discovered that the lanterns, although superior in style to what he had known until then, did no more than what they were supposed to do: shed light. He observed, took note, harnessed the energy of his fellow workers and of experts. From workshop to workshop, he gathered advice, compared techniques, acquired rich memories and learned from this unrivalled city. He studied how the art of bending and spinning, how a light curve can modify the effect rendered and change the ambiance. With his perspective and strong observation he gauged proportions and learned to differentiate between the banal and the unique. He quickly understood that lanterns bring life, magnify monuments, shade gardens, showcase walls that had been faceless for centuries. Light shines and must be able to spread, fragment, highlight and isolate without ever dazzling. Light changes as the hours go by, it soaks up seasonal atmospheres, reflects its environment and constantly reinvents places and spaces.

Taming the dark that deprives us of what is beautiful

1910 was a milestone year for him. He started a family and set up his workshop in Belleville, in the working class neighbourhood of Paris, with the ambition of focusing his activity on what is beautiful. He combined his know-how with the demands of a varied clientele and thus created the lantern of a thousand uses. Jean Pradier forged his creative independence and quickly gained a solid reputation for high quality. The special bond with his two sons encouraged him in his quest. They both soon followed in their father’s steps.

A passionate and visionary family

Roger, the younger son, brought about continuous and respectful developments and integrated decisive technical innovations for new products and new uses. He perfected his father’s gestures, was conscious of the need for providing strong creation and pushed the requirement of quality. While he understood the importance of inherited tradition, he also understood the need for reasoned modernity. His son, the third generation of these talented craftsmen, broadened the company’s horizons. An open and curious person, he went to explore international markets, experimented with alloys and made creation his driving force of action. Always attentive and reactive, infinitely respectful of the founding values, he soaked up the developments of a changing world that drives people to push the limits of what is possible.

Since then, the Pradier family has passed the baton and transferred its knowledge and skills by drawing in particular from the convergence of shared passions. The creative ambition, the high standards of manufacturing and the quest for excellence are the main hallmarks of the Roger Pradier® company. The course of its history is solid, held together by a passionate team of women and men who constantly enhance it with the added value of their experience, holders of unrivalled and therefore precious knowledge and skills, inheriting and in turn passing on a history dear to them that has travelled through three centuries.

Installation of the Saint-Maur factory, near Châteauroux in the Indre department

Opening of the Office - Showroom

Playing with light is understanding shadow, contrast, diffusion, and therefore creating the possibility of unique aesthetics. By observing its effects on natural or urban elements, light helps to better control volumes and proportions. Playing with light means opening up a playing field on a worldwide scale.

Lighting up and accompanying life

Our products were created to showcase life: to evolve in all circumstances, to bring together or take distance, diminish or magnify. To do this, one must be attentive, curious, visionary, interested and capture in order to enchant the space.

Excellence is the ultimate quest

Rendering remarkable aesthetics – a blend of tradition and modernity – high-performance features and a credible long-term guarantee. This triad of excellence is only possible if based on a threefold expectation: unrivalled know-how, high quality manufacture and a creative obsession.

Unique expertise in metalwork: aluminium and
its 25-year anti-corrosion warranty, stainless steel, copper, brass and others...

An innovative research and design department for whom rain,
hail or shine all play a role in stimulating creation. 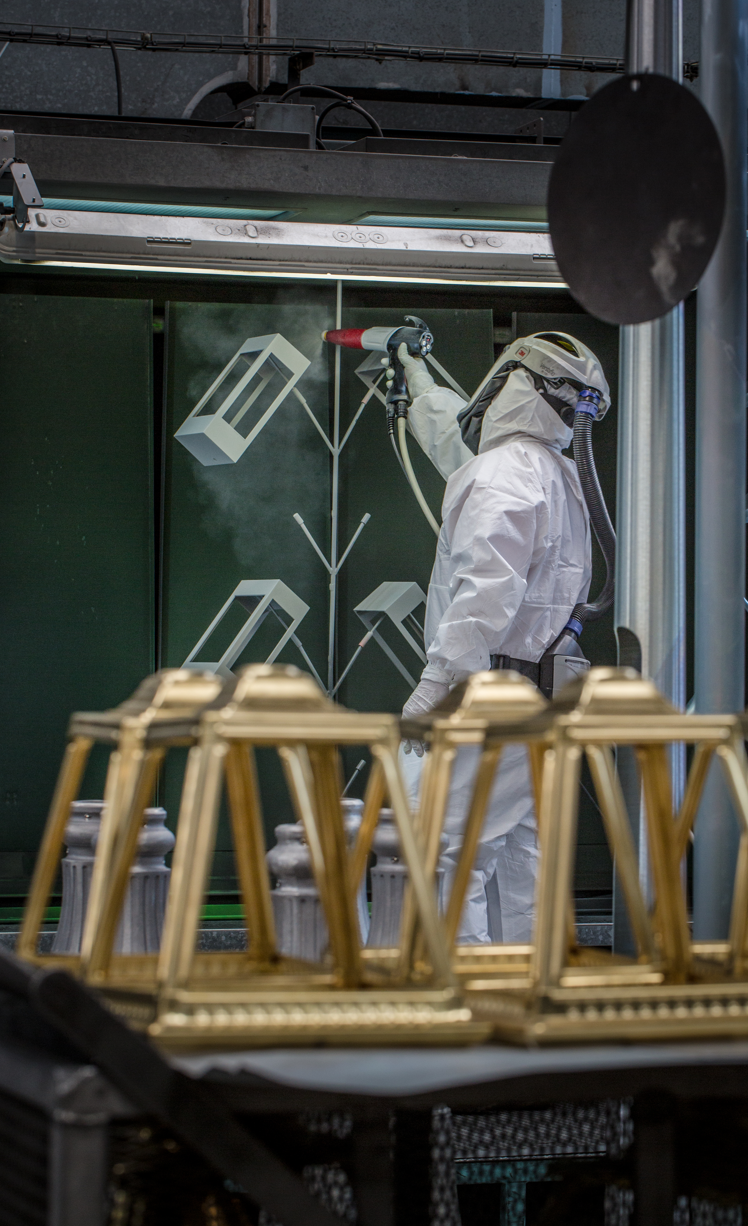 Powder coating processes are non-polluting application methods for coating and protecting metallic holders. The paint comes in the form of a thermoplastic resin powder applied by electrostatic projection.
The part is then placed in an oven at 180° C which leads to the fusion and polymerisation of the thermoset powder. 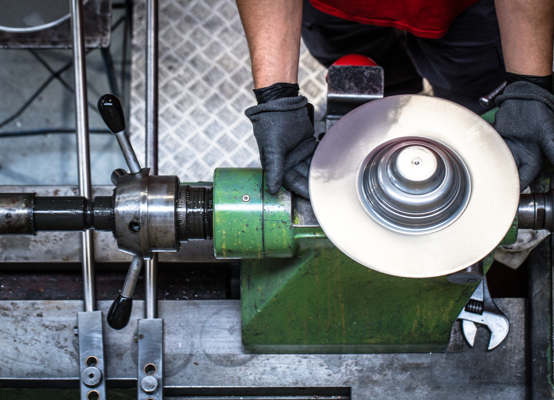 Metal spinning on a block is a plastic deformation process of a sheet of circular metal known as a blank.

The operator applies force and a circular movement to progressively deform the blank on the mandrel. 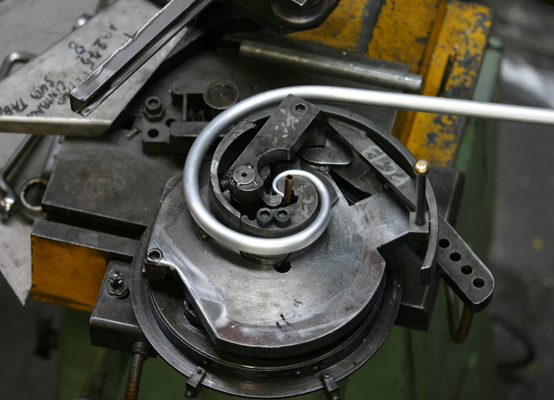 Bending is a mechanical process to deform a tube or bar following a radius and an angle with a tube bender. 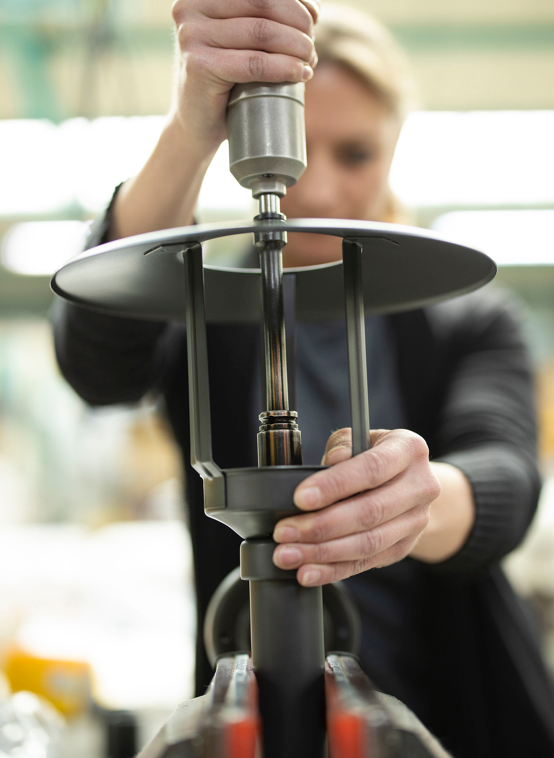 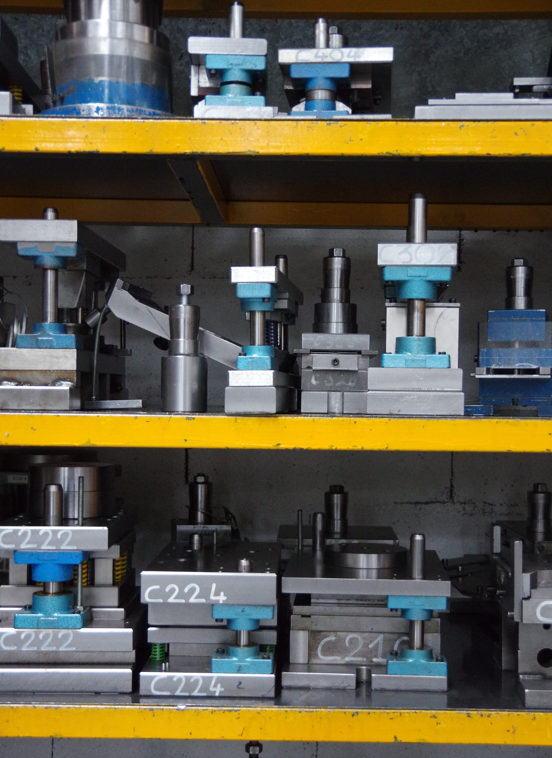 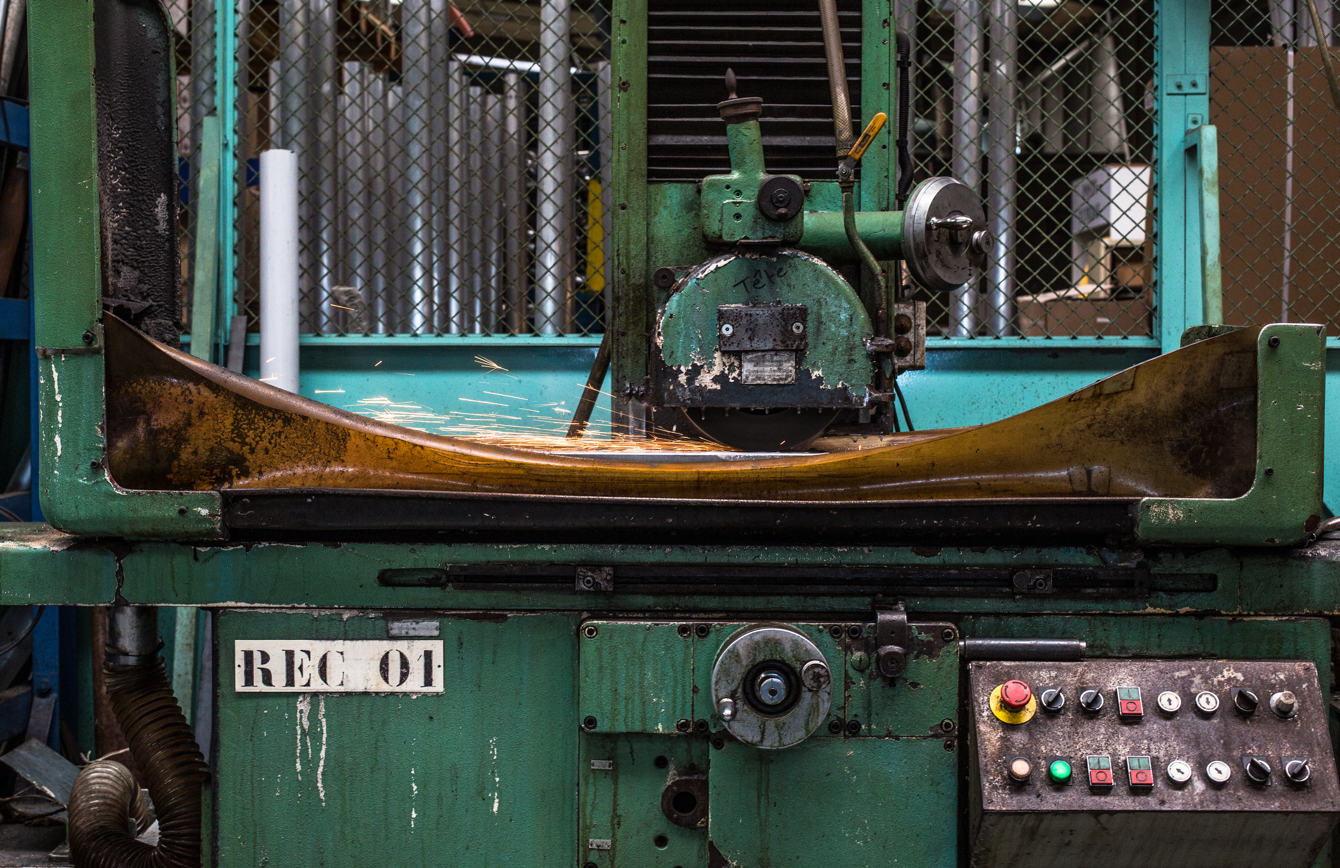 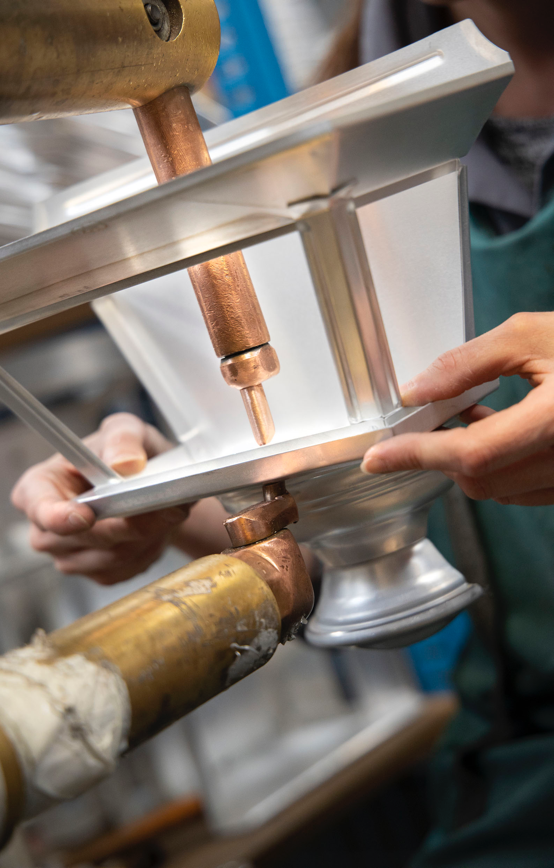 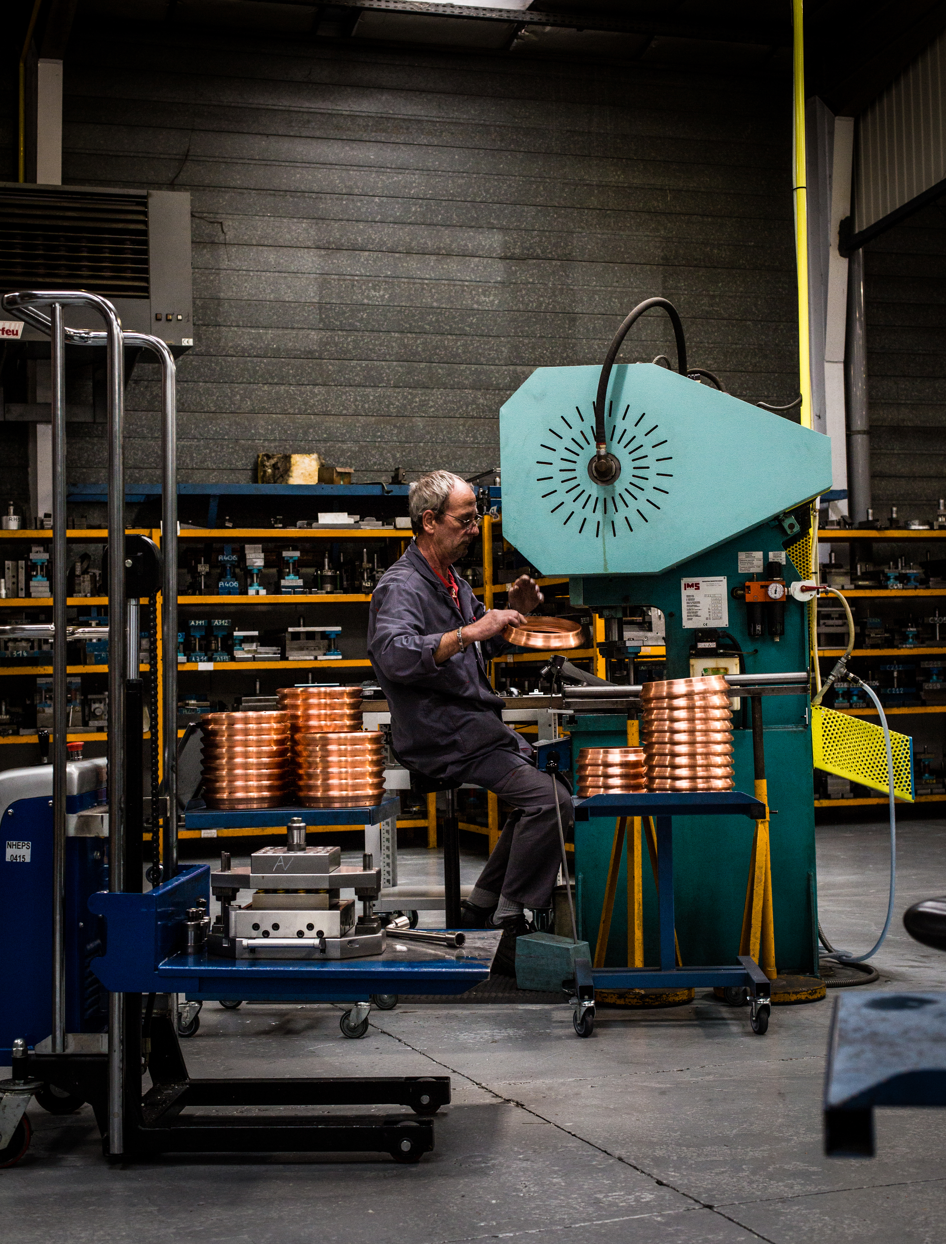 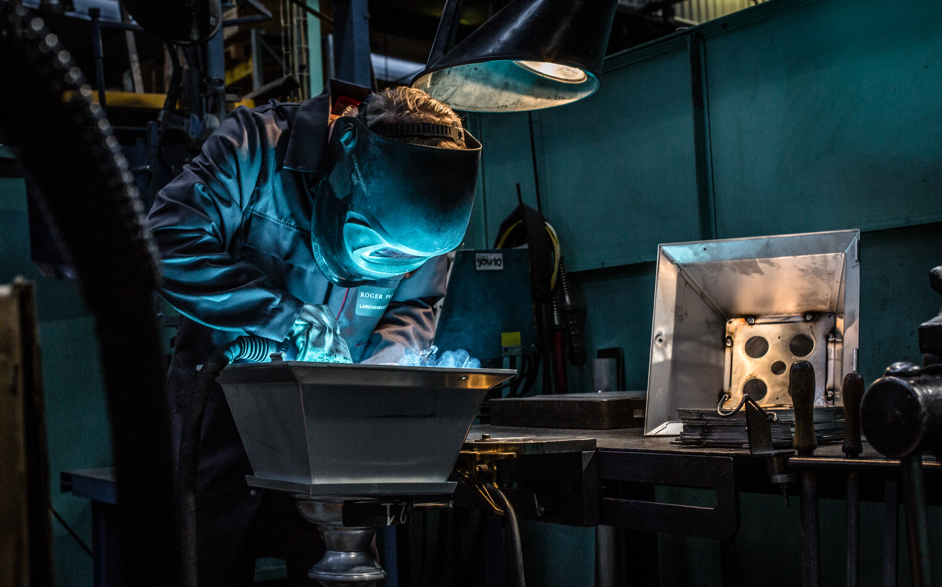 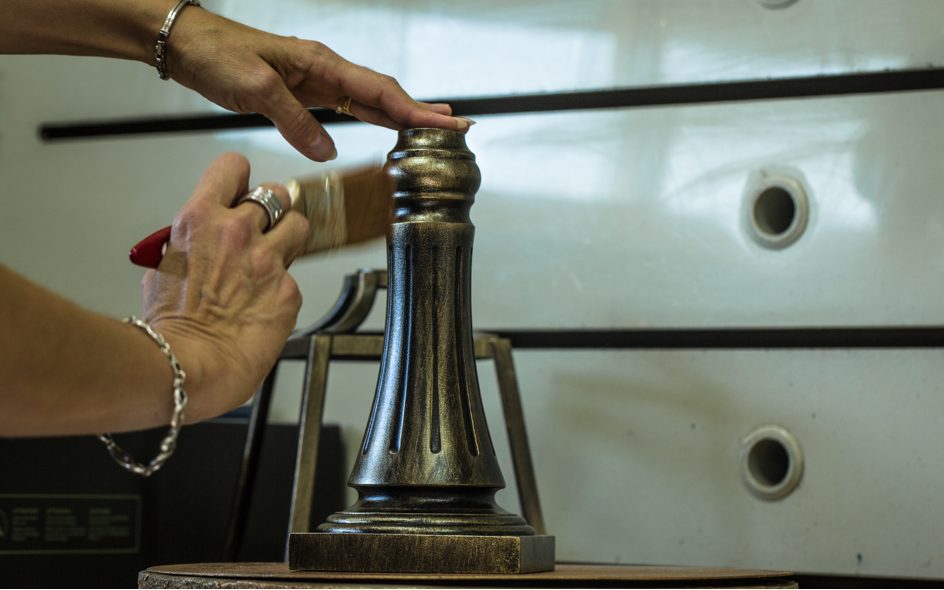 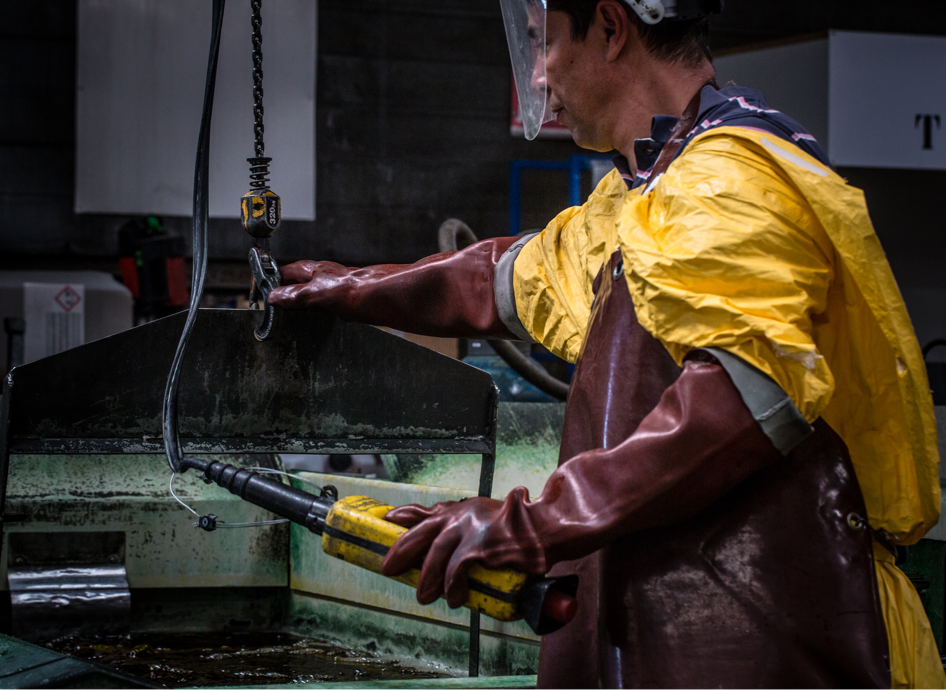 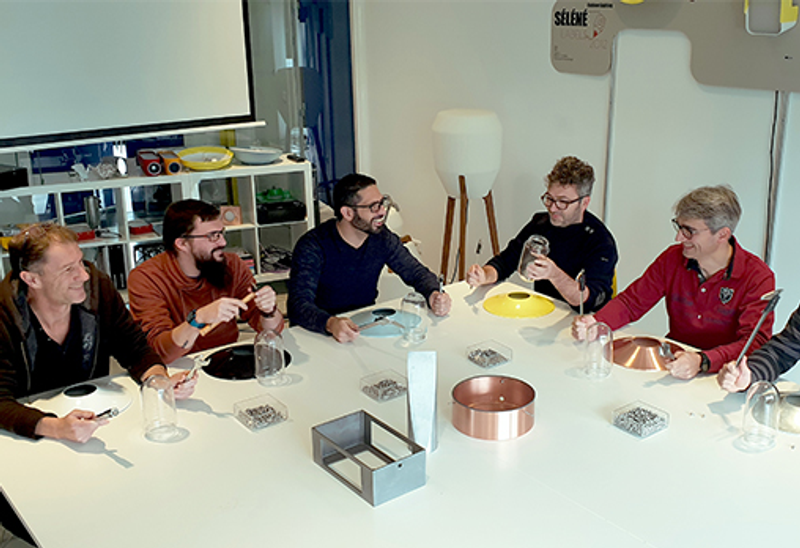 Powder coating processes are non-polluting application methods for coating and protecting metallic holders. The paint comes in the form of a thermoplastic resin powder applied by electrostatic projection.
The part is then placed in an oven at 180° C which leads to the fusion and polymerisation of the thermoset powder.

Metal spinning on a block is a plastic deformation process of a sheet of circular metal known as a blank.

The operator applies force and a circular movement to progressively deform the blank on the mandrel.

Bending is a mechanical process to deform a tube or bar following a radius and an angle with a tube bender.